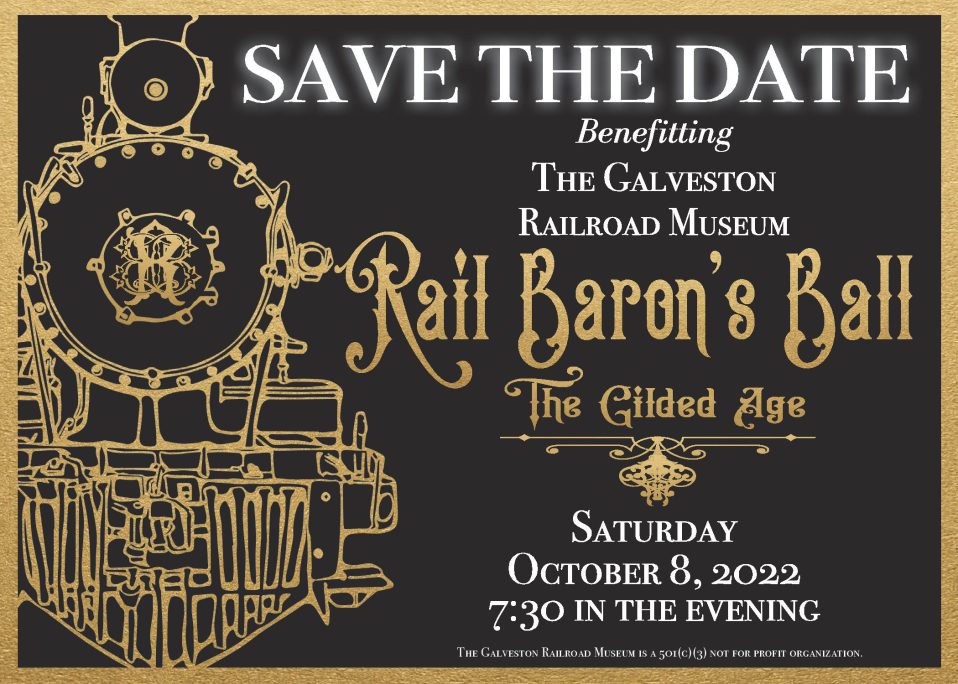 GALVESTON, TX - The Galveston Railroad Museum is hosting their first gala in 20 years on Saturday, October 8. The Rail Baron’s Ball, The Gilded Age, celebrates the golden age of railroad and the rich history of the Center for Transportation & Commerce.

The Arthur R. Carmody, Jr. Library, a repurposed Amtrak luggage car, will house the Carmody family’s railroad book collection and rare museum documents that will be made available to scholars, students, members and by request. The library car is designed for mobility and will be used for emergency  evacuation for safe keeping of documents and exhibits in case of a hurricane.

Formerly Galveston Union Station, The Center for Transportation and Commerce was established by a Moody Foundation grant in 1972 initiated by Mary Moody Northen. The grant funded the restoration and repurposing of the Santa Fe Building, now known as Shearn Moody Plaza. Situated on 5 acres of railyard, the station was once a thriving, operating train station that served major railroad companies including Union Pacific, Santa Fe Railroad, and Southern Pacific Railroad, who transported merchandise to and from the Galveston Wharves to various locations across the United States.

Opening to the public in 1983 as The Galveston Railroad Museum, the 501 c(3) non-profit organization offers educational exhibits and the opportunity for the public to immerse themselves in railroad history, both locally and nationally. The museum has continued to thrive despite severe damage from Hurricane Ike that flooded the entire museum including the railcars.

Following years of recovery and renovation, the museum was back on track to regain its position as a major learning center and tourist attraction when it sustained additional storm damage. With 75% of the museum open to the public the board of directors and staff continued recovery efforts until the COVID Pandemic closed the doors for almost 2 years.

Thanks to federal assistance, PPP and Shuttered Venue Grants, and the support of foundations, community donations and membership, the limited staff at the Museum continued renovations and exhibit maintenance while waiting out the pandemic.

Now fully opened to the public, the museum is experiencing increased attendance and renewed public awareness of the significance of railroad history and static exhibits. The Polar Express Train Ride entertained more than 28,000 visitors, November thru December 30, 2021, and the museum anticipates a record number again this year.

Museum renovations scheduled for completion in 2022 include the Railroad China and Model Train exhibits and the Railroad Theater that will provide a venue for educational films and speakers.

New projects include the Oral History and Speakers Series, funded by the Dr. Leon Bromberg Charitable Trust, the restored Union Pacific Mini Train, a significant Pullman Porter Exhibit, and the nation’s only Rail-Hotel; an opportunity to sleep on a luxury train. Recently restored are the popular white alabaster sculptures in the Train Depot, and the outdoor murals refreshed by artists Catherine Stroud and Elizabeth Punches.

Make sure to copy Registration number after successful submission.

Thank you for payment.

Your ticket for the: Rail Baron’s Ball